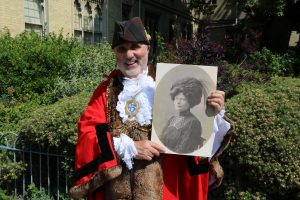 On Tuesday 23rd June 2020, on a lovely sunny day as lock-down was just beginning to ease, the new Mayor of Brighton & Hove, Councillor Alan Robins, in full mayoral robes, visited us at the Royal Pavilion Gardens near the entrance to the Museum. He was there to show his support for the proposed statue for Mary Clarke and was accompanied by the Mayoral Consort Val Cawley. We have the all-party support of the City Council, but we are particularly grateful to Cllr Robins, the former Chair of the Tourism, Development and Culture Committee, who has backed this initiative from the start.

The Pavilion Estate has deep historic ties with the suffrage movement. In 2018 the Dome was declared a site of National Suffrage Interest by Historic England, because so many meetings had taken place there. We know that Mary herself chaired and spoke at a large meeting there in May 1910, seven months before she died. However, we also know that suffrage meetings took place in the Pavilion itself and in the tea rooms adjacent to the Pavilion (almost certainly on the site of the present Pavilion shop). Mary’s memorial service in January 2011 was held in the Pavilion. At least one suffrage meeting took place in the Chapel Royal and we have been informed (though we do not yet have written evidence) that fundraising teas took place in the Gardens. 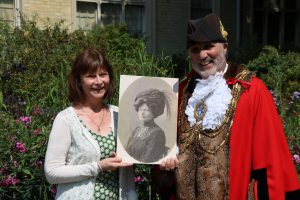 Our aim is to place Mary’s statue in the Gardens, as close as possible to the entrance to Brighton Museum, where it can be linked to educational displays in the Museum. We hope that every school child, adult resident and visitor will see and recognise the statue as a symbol of the city’s ongoing commitment to democracy, equality and women’s rights.