Following months of discussion, research and painstaking work in miniature, our wonderful sculptor Denise Dutton has completed the rough plaster line maquette of Mary. She is now in the process of preparing a resin copy and a mould for the final bronze.

Denise has faced many challenges. She has had to work from only 5 photographs, some of which are of poor quality and none of which depict Mary’s whole body. In addition to that, we set her the difficult task of depicting someone who was both frail and self-effacing, but at the same time, strong and formidably brave, a shy leader, a ‘martyr’ with a wry sense of humour. 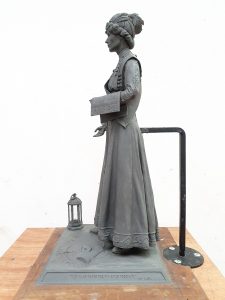 We asked Denise to tell the story of Mary’s life and death, expressing her gentle dignity and calm strength as well as her courage and determination. The agreed design depicts Mary after leaving prison, two days before her death. She gestures towards a lamp at her feet which she has left for others to pick up. Her hand is held low, so that children can hold it and pose for photographs (we suspect many will want to rub the lamp and make wishes). The lamp references the statement by Isabella McKeown, made at Mary’s memorial meeting in the Royal Pavilion. She said “Her they must not mourn in silence. They must take the torch from her and light the darkness…”

Mary wears a suffragette sash and on her left arm carries a last few copies of Votes for Women, the suffragette newspaper she regularly sold in Brighton. The front page of the November 1910 issue depicts the events of ‘Black Friday’, 18th November 1910, when she, like so many other women was injured by police violence. Mary was deeply distressed at the suffering of women that day, many of whom were subjected to sexual abuse. 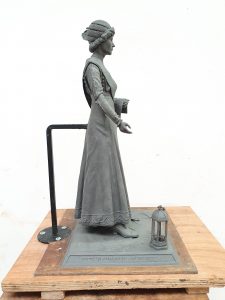 Mary wears the Hunger Strikers’ medal and walks across the implements used in forcible feeding, which she ignores and which are imbedded in the surface of the plinth. Her clothing, accurate for the period, subtly references Mary’s background as an artist, her love of flowers and her time in prison. The pattern on the skirt includes the ‘prison arrow’ which was used on convicts’ clothes and was carried with pride on suffragette banners.

The low plinth carries Mary’s words “I am glad to pay the price for freedom..”, with the above quotation from Isabella McKeown, as well as Emmeline Pethick-Lawrence’s statement that Mary was the “first woman martyr who has gone to death for this cause.”  Just days after Mary’s death, her grief-stricken sister Emmeline Pankhurst wrote: “She is the first to die. How many must follow…”. Those words will be on the surface of the plinth, curving around the line of the feeding tube embedded in the bronze, bringing the two sisters together. 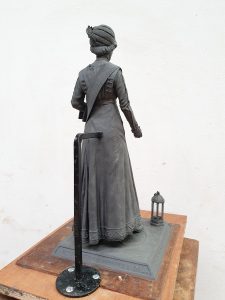 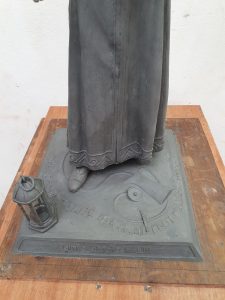 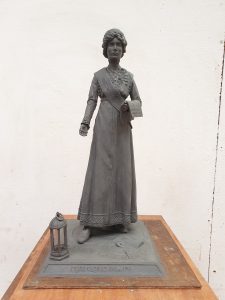