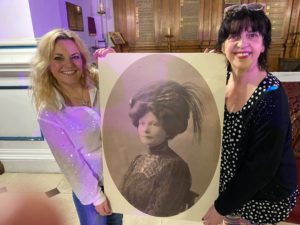 The concert was hosted in sparkling style by comedian Zoe Lyons and the hugely effective appeal for donations was made by broadcaster Simon Fanshawe, one of our Patrons. After all expenses had been met, the event raised £4,500.

Cllr Alex Phillips, Mayor of Brighton & Hove, was there, as were many councillors. Juliet Smith, Deputy Lieutenant for East Sussex was present, and introduced the evening in her capacity as one of the charity’s Patrons.

Jazz fans and others who knew little about jazz, packed the church to hear the two singers present “Double Standards – an evening of jazz and joy”. There were numbers by Waits, Mitchell and Bennett skilfully mixed with lesser known classics. At times the audience sat in rapt silence, stunned by the talent of the singers and at others, they cheered, whooped and sang along. Claire Martin’s extraordinary rendition of A Natural Woman had most of the audience singing.

Claire Martin and Liane Carroll were supported by local a cappella group Women of Note and feminist punk band Siren. Siren gave an upbeat first public performance of their moving Song for Mary, especially written by Jude Winter in support of the Mary Clarke Statue Appeal. Women of Note’s rendition of Nana Was a Suffragette was a revelation to many of the audience, who had never heard it before.

The event was organised by Jean Calder and the Mary Clarke Statue Appeal, but with the support of many, many others. Jean said:

“We are so grateful to Claire and Liane for generously sharing their superb music with us. Many thanks too to Siren and Women of Note for their music. Also to Zoe, Simon and Juliet for their pitch perfect interventions. However, the evening could not have been the outstanding success it was without the help of our wonderful team of volunteers the Friends of Mary Clarke. Also our helpers from the B&H Women’s History Group, inVISIBLEwomen and others. I’d like to add my personal thanks to Kate Ray of Whiskey Bravo Productions Ltd, our brilliant stage manager on the night; to Pepper our superb Sound Engineer; and to Laura Chatburn of St George’s Community Centre. Last but not least, thanks are due to Jenny Stroud, jazz fan extraordinaire, who introduced us to Claire Martin.”

Do Something Amazing. Fundraise for our Appeal
HERE